“The GB rockets are the last type of chemical weapons to be destroyed at the Blue Grass Army Depot,” said Dr. Candace Coyle, BGCAPP site project manager. “We are committed to safely eliminating the remaining U.S. chemical weapons stockpile by 2023 and then safely closing the plant.”

“Our constant theme throughout every campaign has been ‘safety’ and it will remain our theme as we destroy rockets containing GB nerve agent,” said Ron Hink, Bechtel Parsons Blue Grass (BPBG) project manager. “Our Blue Grass team is ready to finish our mission of destroying every chemical weapon stored in Kentucky.”

“I’m proud of the chemical demilitarization work completed by the BGCAPP team, which operates hand-in-hand with the depot’s supporting structure and environmental compliance offices,” said Col. Stephen Dorris, BGAD commander. “The safe completion of four of the five chemical surety material campaigns in just three years is truly noteworthy. It’s amazing to think that the GB rocket campaign is all that’s left to safely neutralize after so many years of hard work safely storing and securing the various GB, VX, and mustard agent material. These next several months will undoubtedly be filled with challenges, but I’m confident in the ability of the dedicated professionals Team BGAD has working to complete this very important mission. Following the completion of this important chemical surety mission, the depot remains postured to continue its daily lethal and non-lethal, material support mission to the Joint Warfighter. The depot was here long before chemical surety material was ever moved here, and we plan to continue the receipt, storage, maintenance, shipment and demilitarization of conventional munitions and material for many years into the future.”

“They really are starting on destroying the last chemical weapons in the U.S. stockpile,” said Dr. Doug Hindman, Kentucky Chemical Demilitarization Citizens’ Advisory Commission chair. “That’s an achievement we’ve all worked toward for years. Once they finish, safely, America will be totally free of stored chemical weapons.”

Under the observation of trained operators, automated equipment will disassemble more than 51,000 rockets and drain the chemical agent. The agent will be neutralized by mixing it with water and caustic to produce hydrolysate. After the agent is confirmed destroyed, the hydrolysate will be pumped to holding tanks. From there, the hydrolysate will be safely shipped via tanker trucks and further processed at Veolia Environmental Services in Texas.

The stockpile sites in Colorado and Kentucky account for the last 10% of what was originally a national stockpile of more than 30,000 tons of chemical weapons. The U.S. Army Chemical Materials Activity (then Agency) destroyed the initial 90%, which was stored at seven other sites across the U.S. and on Johnston Atoll in the Pacific. Chemical weapons destruction in Colorado began in 2015.

Both sites are on target to complete destruction of the chemical weapons stockpile by the Chemical Weapons Convention treaty commitment of Sept. 30, 2023, and before the congressional deadline of Dec. 31, 2023. After chemical weapons destruction operations are completed, the closure phase will continue beyond that time for an additional three to four years. BGAD will continue its conventional weapons missions beyond the BGCAPP closure phase. 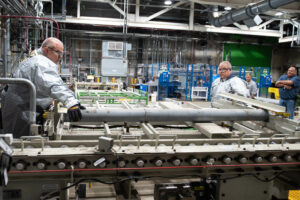